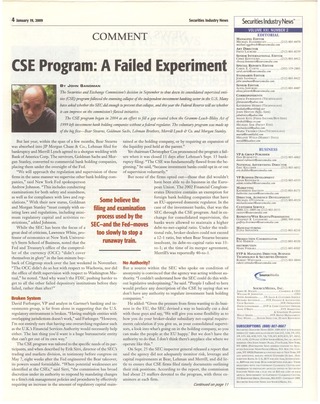 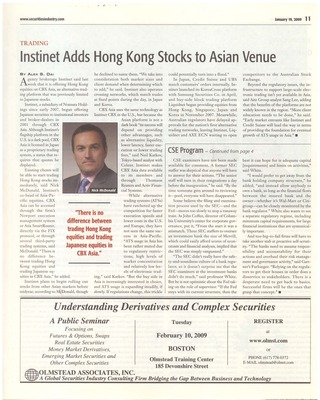 The CSE Program: A Failed Experiment

The Securities and Exchange Commission’s Consolidated Supervised Entities Program (CSE) encouraged the unsustainable risk-taking of Wall Street during the 2000s through a laissez-faire approach to regulation. The CSE allowed the Big Five investment bank holding companies--Bear Stearns, Goldman Sachs, Lehman Brothers, Merrill Lynch and Morgan Stanley--to use leverage, or borrowed money, to invest in securities regardless of their risk. In 1975, the Securities and Exchange Commission (SEC) limited the debt-to-capital ratio for these firms at 12-1. The CSE gave its blessing to ratios for the Big Five that ran beyond 40-to-1. Federal Reserve vice-chairman Alan Binder pointed out that a firm that has a 33-1 debt-to-capital ratio could be wiped out with a 3% decline in asset values. Following the collapse of Lehman Brothers, the CSE was pronounced a failure by SEC commissioner Christopher Cox, a foe of regulation, when it was shut down in September 2008.

The CSE was created in 2004, following the 1999 passage of the Gramm-Leach-Bliley Act, which repealed four key sections of the Glass-Steagall Act. Part of the 1933 Banking Act, Glass-Steagall passed several days after President Franklin Roosevelt took office. In the wake of the 1929 stock market crash, these Depression-era regulations were designed to discourage banks from speculating in securities and invest instead in industry and commerce.

With Glass-Steagall repealed, the investment banking sector and the Big Five investment banks were essentially left without a regulator. That task fell to the SEC, not the New York Federal Reserve Bank, one of the 12 regional Federal Reserve Banks where the headquarters of the Big Five were located. As Erik Sirri, then director of the division of trading and markets told the Senate Sub-committee on Securities, Insurance and Investment on May 7, 2008, "...under the Gramm-Leach-Bliley Act, the SEC is responsible for regulating the broker-dealer subsidiaries of investment banks, but no regulator in the Federal government is given explicit authority and responsibility for the investment bank holding companies..."

The transition from Glass-Steagall to Gramm Leach Bliley (GLB) had champions and critics, from those who blame the 2008 financial crisis on GLB and want the repealed sections of Glass-Steagall restored to those who say GLB was too restrictive. Others point to a gradual erosion of regulation in the banking and securities industries during the 1970s, as the securities industry began to offer services traditionally provided by banks. As NYU Stern Business School professor Lawrence White put it, “…larger corporations were increasingly encouraged to borrow money through bond issuances in the securities markets rather than through loans from a commercial bank.”

The shutdown of the CSE was preceded by the collapse of Bear Stearns seven months earlier, one of the Big Five investment bank holding companies the CSE regulated. Observers still disagree as to whether the Federal government intervened because Bear Stearns faced a liquidity crunch or had become insolvent, but the SEC—and the CSE—were shoved aside when the New York Fed brokered a deal that let JP Morgan Chase take over Bear Stearns. In an August, 2008 address, then Fed chairman Ben Bernanke acknowledged that the government had few levers to pull during a crisis of this kind, when he said, “…in the rare circumstances in which the impending or actual failure of an institution imposes substantial systemic risks, the standard procedures for resolving institutions may be inadequate. In the Bear Stearns case, the government's response was severely complicated by the lack of a clear statutory framework for dealing with such a situation.”

A month before the CSE was shut down, Dwight Jaffee and Mark Perlow wrote in their paper, Investment Banking Regulation after Bear Stearns, that “The markets will not believe that the Fed will allow market discipline to run its course until it allows a major bank to fail; however, a Fed threat to do so is not credible as long as the investment banks remain too interconnected to fail.” By the end of 2008, the Fed and the Treasury Department let one fail--Lehman Brothers--and acknowledged the interconnectedness of the remaining four when it bailed out Goldman Sachs and Morgan Stanley through the Troubled Assets Relief Program (TARP) while arranging the shotgun marriage between the nearly-broke Merrill Lynch and Bank of America, also a TARP recipient. In a September 2008 report released two weeks after the collapse of Lehman Brothers, SEC inspector general David Kotz told the Washington Post that the SEC identified “numerous potential red flags prior to Bear’s Collapse…but did not take action to limit these risk factors.”

The CSE was not widely covered by the mainstream press. Stephen Labaton, who probably followed this more closely than any other reporter, left the New York Times in 2010 to become a consultant on regulatory and legal issues at Goldman Sachs, the biggest of the CSE Big Five.