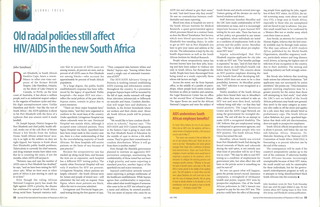 Human rights attorneys and AIDS activists I spoke to in South Africa in the 1990s were alarmed by the practice of identifying anyone tested for HIV, the virus that causes AIDS, by name rather than through a unique identifier. Proponents of anonymous testing say that name reporting discourages at-risk people from seeking treatment, modifying their behavior or being tested in the first place.

In the aftermath of apartheid, South African public health officials seemed indifferent to the benefits of anonymous testing versus the drawbacks of name reporting, but this may have reflected the conclusion that the treatment available in the West was unaffordable. Many advocates for people with HIV/AIDS would argue that anonymous testing wasn’t significantly more expensive than name reporting—although that might not be true throughout the developing world.

On July 5, 1996, the same month that this story appeared, South Africa’s Health Minister Nkosaqana Dlamini-Zuma spoke at the 11th Annual Conference on AIDS in Vancouver, British Columbia and said, “Most people infected with AIDS live in Africa, where therapies involving combinations of expensive anti-retroviral drugs are out of the question.” That year the South African Health Ministry estimated that about 850,000 people—about 2% of the country's population—was HIV positive.

The HIV/AIDS crisis became something of a metaphor for the hopes many had for post-apartheid South Africa, especially those that were deferred or dashed. Thabo Mbecki, who succeeded Nelson Mandela as president, embraced the theory that AIDS was not caused by a virus. Mbeki’s health minister, Manto Tshabalala-Msimang, suggested that eating lemons, olive oil and garlic would cure the disease. Mbeki’s administration thwarted attempts to make anti-retroviral (ARV) drugs available to people with AIDS in South Africa, even though ARVs had been successful in blocking perinatal transmission from a mother to her unborn child. During his presidency, which lasted until 1999, Nelson Mandela was indifferent to the AIDS crisis until the early 2000s. He later expressed regret that he didn’t address the situation sooner.

The Mbeki government was replaced when Jacob Zuma was elected president. Zuma had baggage of his own, including being charged with raping an HIV-positive woman. While acquitted, he stated at trial that having a shower after sex would minimize the risk of transmission. The South African Health Ministry said in 2005 that South Africa had the highest HIV seropositivity rate in the world.

But AIDS denial began to end under Zuma. By 2009, the government publicized a commitment to test all children exposed to HIV and provide all HIV-positive children with ARVs. According to South African History Online, “the National Strategic Plan of 2007-2011 (established) coverage of HIV-positive mothers with AZT treatment that was estimated at over 95% by 2010. Transmission from mothers to their children was thereby reduced to just 3.5%.”

The AIDS pandemic had not abated, however. According to AVERT, a UK-based organization that formed partnerships with South African community-based organizations, there were 6.1 million people living with AIDS with 240,000 dying from AIDS-related illnesses in 2012. Some 17.9% of South Africans were then HIV positive.

AVERT noted that by 2007 South Africa’s National Strategic Plan ramped up efforts for an antiretroviral treatment program aimed at decreasing the number of new HIV infections. “The current National Strategic Plan for 2012-2016 is framed primarily around the UNAIDS vision of zero new HIV infections, zero discrimination and zero AIDS-related deaths," it said. It had similar goals for the continued prevention of mother-to-child transmission.