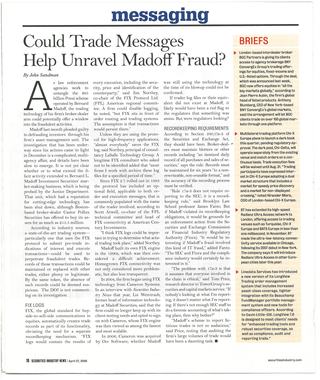 Bernard Madoff was an early adopter of the Financial Information eXchange protocol, or FIX, a data and messaging standard that facilitated the electronic trading of stocks and bonds. FIX consists of messages with buy and sell information that can be exchanged by traders in real time. It had become the global standard for electronic trade communication by 2008, when the fraud exploded.

Madoff’s firm embraced FIX in a way that helped disguise the fraud. FIX connectivity was implemented at Madoff’s broker-dealer firm, a legitimate business. Madoff’s asset management firm, a fraudulent business, was a separate entity on a different floor of his operation near East 53rd Street in Manhattan, where phony trades were generated on paper in an atmosphere of secrecy. There was no FIX implementation there. Connectivity to exchanges, institutional or individual investors was non-existent.

FIX developers say that the fraud could have been exposed through multiple scenarios using FIX trader log files, which contain a record of trades and the traders who executed them. Information in the trader log files could have led investigators to specific trades, traders and possibly to the fraud. Missing trader log files—or their complete absence—would be a sign that something was wrong.

For example, Cohmad Securities, a partnership between Maurice Cohn and Bernard Madoff, was located on the 18th floor of Bernard Madoff Investment Securities and raised cash that was funneled to the fraudulent operations on the 17th floor. According to a story in the September 4, 2009 Financial Times Magazine, excerpted from Erin Arvedlund’s 2009 book, Too Good to Be True: The Rise And Fall of Bernie Madoff, fees were paid to the rainmakers who brought in investors—but they were called brokerage fees and tied to transactions disguised as trades which had no electronic records. The December 10, 2011 Wall Street Journal reported that Cohmad Securities was paid over $100 million by Madoff for its efforts according to SEC filings. Examiners looking at Cohmad’s operation could have asked: Where are the trades and who were the counterparties? Where is the trade data?

But even if fake trade data that could have led to the fraud existed, it is unlikely that examiners knew how to find it. Many SEC staffers were then over-worked, underpaid and too inexperienced to know what to look for. Madoff also didn’t hesitate to exploit his reputation as a figure who was beyond reproach to discourage examiners from digging too deeply. Madoff may have sufficiently covered his tracks so that the fraud would not to be discovered during routine exams—exams which may have been inadequate in any event. Madoff himself has expressed surprise that he wasn’t caught sooner.

Harry Markopolos, former chief investment officer at Rampart Investment Management and an early Madoff skeptic, warned that Madoff was flirting with insolvency by June 2005. But the collapse of Madoff’s Ponzi scheme was caused by the 2008 financial crisis. Madoff’s businesses were essentially brought down when investors rushed to withdraw their money in late 2008 and the Ponzi scheme ran out of cash. It was the rough equivalent of a bank run, reminiscent of the failure of IndyMac and Washington Mutual during the same year, whose balance sheets were built on subprime mortgages that eventually went into default.

The fraud was discovered in December 2008. A month later it was 2009, the SEC’s 75th anniversary and perhaps the low point in its history. The nation was mired in the worst crisis economic since the SEC was established. A good deal of the blame was laid to regulators like the SEC.

In 2012, the SEC released its Post-Madoff Reforms. Among them was a plan to integrate broker-dealer and investment advisor exams, resulting in more robust testing. It was no doubt influenced by Madoff’s success in thwarting examiners.