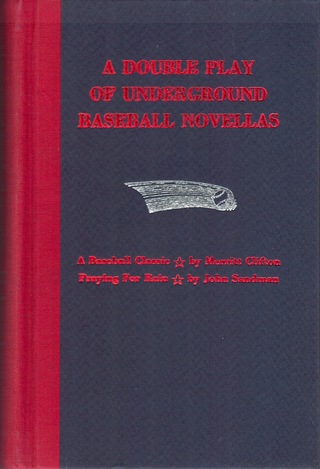 The sky was cloudless and deep over Lake Worth Park in Broward County. Nothing like this calm had been forecast on the radios crackling in the stands. By the sixth inning, people who had come to work on their tans were leaving to go home and seal up their houses. The hurricane that had been sitting off the Atlantic coast of South Florida was starting to move toward shore.

It was the week after Labor Day. The Lake Worth Worthies were in fourth place in the Class A Tri-State Florida League with three games left on the schedule and Hubbs wondered if they would be wiped out by the hurricane. Either way, he couldn’t throw the ball. Joe Sperma, the catcher, got out from behind the plate and ran toward the mound.

“Chrissake, let him hit it. I gotta go close up my trailer before the storm.”

“Can you get the ump to call the game?”

Sperma looked over his shoulder at the home plate umpire. “No, that’s a league situation, we can’t screw around with that.”

Sperma trudged back to the plate and said something to the umpire. The man in black glanced at the sky and yelled, “Play ball!” Shrugging, Sperma squatted back behind the batter.

Hubbs couldn’t get the ball over for the last three batters. He was throwing a cut fast ball and missing the plate, but not by enough so that the ump had to be so fine about it. The coming storm was distracting Hubbs as much as it was Sperma and everyone else.

The first time through the batting order he threw a split finger that sometimes danced like a knuckle ball or dropped like a fork ball and he didn’t know why. The catcher, the whole team had seen it before and had been elated when it was on and let down when it failed to dive and move. The second time through the batting order his ball stopped moving. After 110 pitches, Hubbs felt like his arm was separating from his shoulder. It would feel like that for days.

The sky reminded him of a day fifteen years ago. He was a third-grader, standing on the mound of a Little League field beside Route 4 just above Orlando. The outfield fence was a parade of billboards from the right field foul pole to center field and it made Hubbs think of the sheets hanging from his mother’s clothes line that ran between two trees beside their trailer. He thought of another day when he waited for his mother to come out and have a catch with him. At first he waited inside until she shooed him into the yard and she was alone with his father. At first, he didn’t know what they were doing. Then, in the way that a child sometimes knows, he knew.

When he turned toward home plate, he almost expected to see her. Instead he saw a batter, with one foot out of the batter’s box, the umpire screaming, “Play Ball!” Sperma was throwing down signs. Hubbs saw the closed casket in the funeral home after his mother drove her car into a concrete barrier on the Jack Nicklaus Causeway. He saw himself trying to pry the lid open with his eight-year-old fingers, then felt the adult hands dragging him away.

Hubbs wound up and threw a 50-footer that bounced as the batter lunged at the ball before it skipped to the back stop. The runners stood still.

The home plate umpire was out of his crouch and calling time. Sperma was running to the mound.

"Hubbs! Throw the fucking ball! Let him hit it!"

Hubbs was back among the sheets on his mother’s clothes line. Finally, his mother appeared with her baseball mitt. She was wearing a black skirt with high heels and stockings. Her reddish hair was standing on end, her lipstick smeared like a finger painting after a being locked in the bedroom with Hubbs’ old man. They’d done this before. He hadn’t seen them, but he’d heard them. He didn’t have a word for what they were doing but it was something he couldn’t do with her himself. She was with him instead of playing catch with me, he thought. She tossed the ball to him and when he threw it back, he threw the ball over her head, over the sheets, the way he threw the ball over Sperma’s head in the 5th inning, only on purpose, so she couldn’t catch it. He remembered the look of regret. Did she have the same look when she was locked in the bedroom with his father?

The next pitch clanged against the chain link backstop. The runners moved up to second and third. All he could think of was the look on his mother’s face as he threw it over her head that day and made her chase it. He recovered in time to catch the ball as Sperma fired it back to him.

Then Hubbs was thinking of another game. He was back on the mound of that Little League field near Orlando. Seven kids stood behind him with LARRY'S MEAT MKT splayed across their uniforms. He couldn't remember the catcher but the manager was his old man, pacing the dugout like an angry, expectant father, waiting for Hubbs to throw the ball.

The signs along the outfield fence were broken by a field of yellow paint heralding the words JESUS NEVER FAILS. Hubbs didn't think about Jesus then. He never failed, while Carl Hubbs, now age ten, couldn't do anything right. He walked the bases loaded as his father glared from the dugout. After the first walk, there was a lump in his throat. With each pitch that he threw, he choked up a little more. There were tears in his eyes. He couldn't see the plate. By then his mother was dead. He thought about their games of catch, when he threw the ball over her head, and wished he could have them back.

That game was as real as the single A pro game he was pitching in now. Hubbs worked from the stretch but didn't check the runners. The ball sailed over the batter's head and thumped against the back stop but the runners held. The Worthies manager was on the top step, yelling at him to throw strikes and pointing at the sky. His feet were on the mound in Lake Worth Park but his head was in Little League. After he walked the bases loaded he was ready to cry. It wasn't just the fear in his heart, it was the pain in his arm. He wanted to come out of the game but was afraid of what his father would say. What he didn't know about baseball, he knew about his father. When he failed, his father failed.